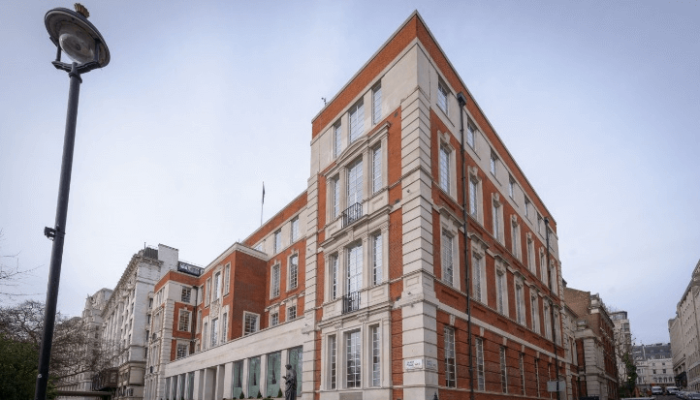 The Institution of Engineering and Technology (IET)

The Institution of Engineering and Technology (IET) was looking for a sophisticated media distribution and digital signage system to enhance its’ newly designed and refurbished central London HQ. With numerous meeting rooms, busy central areas, and large theatres to connect to the system, IET selected MediaStar Systems to help it achieve its aims.

The IET is a professional membership body with over 167,000 members. It is multidisciplinary, reflecting the increasingly diverse nature of engineering, and acts as a knowledge network, an influencer of Government and EU policy and manages a programme of awards and scholarships to recognise excellence in the field.

The IET recently underwent a £30 million refurbishment of its Engineering Home, Savoy Place, London - an ‘Engineering Hub’ dedicated to providing suitable space for networking opportunities, state of the art research events, meetings and AV. Fittingly, the new design embodies a vision shared by the forward-thinking engineers of today. Savoy Place is a popular venue for BBC live broadcasts and was awarded ‘Best UK Venue Brand’ for three consecutive years.

The IET required that the new AV and IT systems must be developed for two key purposes. The first was to support the needs of IET members, and the second was to meet the requirements of companies looking for first-class venue hire facilities in central London. This meant that IPTV, video and audio conferencing, video streaming and outdoor broadcast points all had to be designed and implemented across the entire building.

MediaStar Systems was selected by consultant Recursive AV in partnership with the IET, and was installed and commissioned by Snellings, who were selected as the specialist integrator by the IET to implement the project. This choice was based on MediaStar's expertise in delivering scalable, highly reliable systems to meet diverse requirements.

MediaStar's solution was selected to allow live TV and encoded media to be streamed across the newly installed displays. The IET was keen to ensure that the system could support digital signage and internal messaging as well as providing the IET with the ability to control and manage its streamed content throughout.

David Yates at Recursive AV, said:  “A reliable IPTV system was central to the requirements of this project and was seen as the backbone transport to getting the many internal, external and live channels the IET wished to create around the building in the most effective manner. We also wanted this to be the driver for both the digital signage system and also the room booking displays as we, along with the client, felt this would offer the greatest flexibility over any public facing screen, allowing the centralised switching of content from room signage, corporate branding, live feeds and digital signage information amongst others. In this aim, the IPTV system was used to its maximum potential as that transport mechanism rather than simply being the TV distribution. This is why we turned to MediaStar Systems.

“The project incorporated many different lecture theatres, meeting rooms, a library and common meeting areas, so  the IPTV system had to comprehensively acquire, store and schedule media content before distributing it in the highest possible quality as and where it was needed and with precise accuracy. The IET also needed this inbuilt flexibility to display HTML, JPEGs and other internally generated information and the ability to have portable encoders, which could be deployed on the fly across the many front of house rooms that Savoy Place has to offer to both internal and external clients, from the rooftop down to the basement.”

MediaStar is now being used to stream media sources from the Kelvin Lecture Theatre and Turing Theatre. It is also supporting digital signage to a 1x2 video wall in the Faraday Library and to fifteen 70” signage displays and 29 meeting room 10” signage screens for meetings, exhibitions, conferences, award ceremonies, speeches and private hire.

Internal messaging is relayed via MediaStar to welcome boards at the front of house, and throughout the rest of the building’s common areas. The IET’s room booking system has also been integrated into the MediaStar decoders to display information about who is using each meeting room, the availability of rooms and how to book.

Pascal Akaraonye, Digital Content Executive at IET, said: “The MediaStar system is highly effective at effortlessly distributing a wide range of content - from playlist of videos and images to camera feeds -- around our building. I manage this process using the Media Manager software which is robust and easy to use, but perhaps the most impactful element has been the ability to schedule content throughout the building, allowing each box to output its own individual content at a chosen time. The flexibility of the system is very impressive.”

Alex Moss UK and Eire Sales Manager at MediaStar, said: “This was a highly prestigious project requiring IPTV distribution and digital signage that could flawlessly meet a wide variety of demands. The newly refurbished Engineering Hub at IET sets a high standard in terms of design and presentation and we were keen to ensure that our solutions would not only meet expectations, but surpass them.”